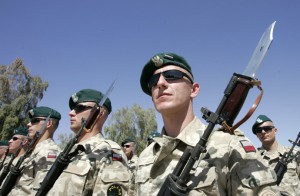 Poland’s Defence Minister Antoni Macierewicz had said on Wednesday the country would join the fight against Islamic State, though he signaled that the scale of its involvement would depend on NATO’s response to Russia’s renewed assertiveness on the alliance’s eastern flank.

“Perhaps some comments are over interpreted. Today there are absolutely no such decisions. These are open issues which we will discuss at the NATO forum,” PAP quoted Duda as saying at a security conference in Munich, when asked about the defense minister’s comments.

“I am as far as I can be from any decisions to send Polish soldiers anywhere. But let’s remember that we are a member of NATO,” Duda said.

“If we want to be treated seriously in NATO, if we want our expectations to be respected we have to understand that other NATO member states also have their fears and interests in other parts of Europe and the world,” he said.

Duda said that he would like to see a permanent presence of NATO forces and equipment in Poland, but that this could be “of rotating nature”.

“This rotation has to be so intense that in practice it would mean permanence,” he said.

Warsaw, which is due to host a NATO summit in July, has repeatedly pressed for more NATO forces on its soil and elsewhere in former communist-ruled Europe, arguing there should be a stronger response to Russian actions in eastern Ukraine.