You are here: Home / Europe / Poland to Take in Syrian Christian Refugees 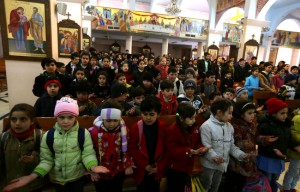 Poland will take in 60 Syrian refugee families of the Christian faith Warsaw said Tuesday, just days after it opposed European Union plans for binding quotas on asylum seekers for its 28 member states.

“Today Christians who are being persecuted in a barbaric fashion in Syria deserve Christian countries like Poland to act fast to help them.”

Estera, a Polish non-governmental organisation, asked the government to allow around 1,500 Syrian Christians to live in Poland.

The NGO said charities, businesses and churches could cover living costs for the refugees.

Like many EU members, Poland opposes the bloc’s plan for binding quotas on asylum seekers, but is open to taking in refugees and migrants on a voluntary basis.