You are here: Home / Senza categoria / ‘Plausible’ that MERS was developed as bio-weapon 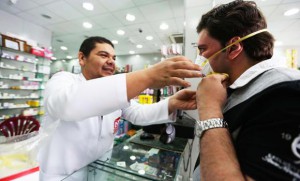 A Saudi ministry of health official has said it’s plausible that Middle East Respiratory Syndrome (MERS) coronavirus was developed as a biological weapon.

Arab News reports that Abdullah Asiri, the ministry’s undersecretary for preventive health, said the fact that the source of the virus was still unknown and that it has limited geographic spread, it should not rule out the possibility of it having been developed as a weapon.

Asiri said that the ministry of health would have to verify any information suggested it was developed as a weapon.

He said despite the virus being in existence for 30 years in Saudi Arabia, the first case of it spreading to humans was reported four years ago. Asiri said that 74 percent of camels have antibodies for MERS, which he said would indicate that the camels were infected at some point in their lives.

As a precaution against the spread of the coronavirus, Asiri said the government has banned people from sacrificing camels during this year’s Haj, and said all camels will be prevented from entering the holy sites.