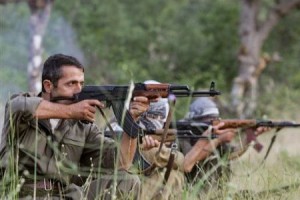 The assaults come amid renewed violence between Turkish forces and the autonomy-seeking Kurdish insurgents, fighting that has shattered a fragile peace process that the two sides started in 2012.

The military said rebels from the Kurdistan Workers’ Party, or PKK, launched an attack Thursday on soldiers protecting a military convoy in Sirnak province, near the border with Iraq. Three soldiers, including an officer, died. The military responded with a counter-offensive that killed one PKK rebel.

In an earlier attack, Kurdish rebels opened fire late Wednesday on a tea house in the mainly Kurdish city of Diyarbakir, killing a police officer and a civilian.

Violence has flared in the region in the past week, with Turkey launching raids against PKK positions in northern Iraq and southeast Turkey, and the rebels escalating attacks against Turkey’s security forces. Meanwhile, Turkey has also been cracking down on the Islamic State group.