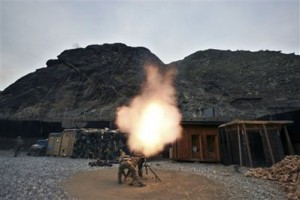 The attack came one day before Turkey’s parliamentary elections, amid a cease-fire and talks between the government and the jailed leader of the PKK, Abdullah Ocalan, to end a four-decade-old Kurdish insurgency.

A group of PKK militants fired two mortar shells late Saturday on Turkish military units in Daglica town of Hakkari province, said a statement by the General Staff of the Turkish Armed Forces.

The army responded by firing back at the PKK and the attack ended, the statement said, adding that there were no casualties.

The PKK, listed as a terrorist group by Turkey the United States as well as the European Union, has been fighting the Turkish government for broader rights and autonomy, leaving about 40,000 people killed until now.