You are here: Home / Senza categoria / Pirate attacks on the rise in 2018 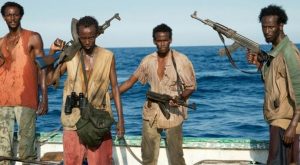 Global maritime piracy may see its first significant increase by the end of this year since the height of the Somali piracy in 2010, like reported by theglobepost.com.

In the first six months of 2018, there have been 107 attempted and actual attacks by pirates globally, up from 87 in the same time span last year, according to a new report from the Interregional Coordination Center International Maritime Bureau.

The increase has been disproportionately located in the Gulf of Guinea on Sub-Saharan Africa’s west coast.

The gulf, which has accounted for over 40 percent of the attacks worldwide so far in 2018, faces unique governmental, geographic and developmental challenges. Nigeria, which makes up a vast majority of the attacks in the Gulf of Guinea, has proven to be especially vulnerable to pirates.

Vessels traveling in Sub-Saharan Africa are particularly susceptible to pirate attacks for many reasons, according to Brandon C. Prins, Professor of Political Science Professor at the University of Tennessee. The long coastline with many inlets that make policing difficult is just one of the many challenges that result in increased piracy.

“Piracy is driven by persistent poverty, corruption, and ineffective governance,” Prins told The Globe Post. “Solutions are difficult because they necessitate significant improvements in the economy and governance, which are challenging and require time.”

Some governments focus on ending illegal, unreported and unregulated fishing to allow local fishers to thrive. This policy encourages locals to take up a sustainable career over becoming a pirate for a living, according to Prins.

“Nigeria is the largest country with the largest population in the Gulf of Guinea and both population size and length of littoral zone associate with piracy,” he said explaining the nation’s unique position. “But Nigeria also has extensive political violence, crime, and corruption, which also fuel contemporary maritime piracy.”

Most piracy occurs in two locations on Nigeria’s coastline according to an IMB map; one is just off the coast of Lagos, the other near the delta of the Niger River.

“Nigeria is not only problematic in terms of attacks at sea,” Dirk Siebels, a maritime security analyst, told The Globe Post. He explained that piracy in the country is “closely linked to the security situation on land and to the lack of effective law enforcement.”

Nigerian poverty fosters an environment of crime. Kidnapping has become a serious problem on land and at sea, with camps and negotiators used by criminals to perpetuate a profitable, sustainable scheme, according to Siebels. On a larger scale, the entire nation’s economy has faced problems from oil theft, as reported by the Nigeria Natural Resource Charter.

Research Fellow in Maritime Security Robert McCabe told The Globe Post that the problems of Nigerian piracy are largely “linked to mismanagement of the nation’s oil reserves and endemic poverty in coastal regions combined with a largely ungoverned maritime domain and an under-resourced maritime enforcement capability.”

“Counter-intuitively, the recent upsurge in attacks in the Gulf of Guinea might actually be the result of more effective counter-piracy measures in certain maritime spaces,” McCabe said. Some measures that lead to decreases in some types of piracy, such as safe anchorages or escort vessels, may cause increases in other types, he explained.

The increase in piracy in the region, which has been a concern for years, prompted a statement from the United Nations in 2016 calling for change in security in the region.

“The Security Council stresses the importance of implementing a comprehensive approach led by States of the region to counter the threat of piracy and armed robbery at sea in the Gulf of Guinea,” the 15-member security council said in a presidential statement, “as well as related criminal activities, to address their underlying causes, and to strengthen both justice systems and judicial cooperation in the region.”

Since the statement, Nigeria has made some changes, but the number of instances of piracy have remained a problem.

In 2017, Nigeria reportedly acquired over 170 assorted boats specifically aimed at ending piracy. It’s not clear how many are active at any one time though, as the measures against piracy are largely reactive, according to McCabe.

“For example, in December 2017 during an operation named ‘Exercise Eagle II’, the Nigerian Navy deployed 13 ships, two helicopters and 80 small patrol boats. So the capacity seems to be there,” he said.

In addition to local forces, there are often international exercises to improve the safety of the region for Nigerian and international trading interests. Shipping and fishing companies are hurt by attacks and theft of their goods, but can do little except lobby the government for increased security. Siebels explained that the government is generally hesitant to bolster a specific force to address piracy, as it is similar to spending money on a police force that is only used to investigate theft and no other crimes, “hardly the most cost-effective way to address the problem.”

This fact, coupled with private armed guards being illegal in the Gulf of Guinea, has lead to further complications of a solution. The enforcement of the laws are “sketchy at best” though, Siebels said. Even so, there are enough restrictions to lead to the rise of indigenous military and police forces leasing their services to protect ships passing through the region.

The solutions to the issue are easily understood, but very difficult to enact because of the unique circumstances of the nations in the Gulf. The experts agreed that reducing poverty and unemployment is an important step in curtailing piracy, as is strategic enforcement of anti-piracy laws.

McCabe noted that gathering intelligence is an important strategy in combating piracy in the region, but noted that there is reason for hope in reducing piracy around the globe.

“It is somewhat misleading to state ‘global piracy is on the rise,’” he said, explaining that numerous regions have seen large decreases in pirate attacks over ten years or more. The nations in the Gulf of Guinea hope to be the next region to achieve maritime security.