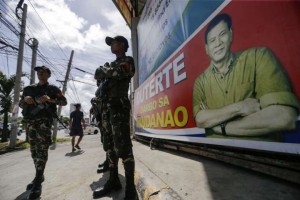 The Philippine National Police (PNP) has thwarted an attempt by a terrorist bomb expert to stage bombing attacks right in the heart of Manila.

Malaysian terrorist Mohamas Amin, who had a 600,000 Philippine peso (S$17,020) bounty on his head, was presented in a press briefing by Chief Supt Roel Obusan, acting director of the PNP-Criminal Investigation and Detection Group (CIDG) on Monday (Oct 10).

Amin was arrested at 4am on Saturday (Oct 8) by joint operatives from the Anti-Transnational Crimes Unit (ATCU) of the CIDG and the PNP Intelligence Group during a raid in Quezon City.

Also arrested were Bilal Taalam, the owner of the house where Amin was staying, and Adnan Malangkis. Eight other tenants in the house were also being investigated.

The CIDG believed all three had links with the Abu Sayyaf Group in Sulu. A fragmentation grenade, several rounds of ammunition, various identification cards, a blue print of a condo mall in Quezon City and a cellular phone were recovered during the raid.

Chief Supt Obusan said that aside from the documents, the results of the police interrogation on the suspects further strengthened their belief about Amin’s plot to stage bombing attacks in Manila.

“Our operatives confiscated a blue print of a building, a condo mall (in Quezon City), so it’s surprising that they are doing some casing on the area,” Chief Supt Obusan said, refusing to name the condo mall to avoid panic.

Amin, who also goes by the names Asman, Akman Amin and Amin Aklam, is a bomb expert and is a subject of an arrest warrant for a murder case filed at the Regional Trial Court (RTC) in Jolo, Sulu.

Other Abu Sayyaf members are also facing the same charges in the same court. Amin and Malangkis were subjected to inquest proceedings for violations of the Comprehensive Firearms and Ammunition Regulation Act and Illegal Possession of Explosives Act before the Quezon City Regional Trial Court.

Amin will also be charged with violations of Article 78 of the Revised Penal Code for concealing his true identity. On the other hand, Taalam was charged with obstruction of justice and harbouring a fugitive or wanted person.