You are here: Home / West Asia / Philippines: the leaders of the Islamic State assault on Marawi have been killed 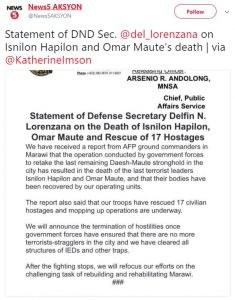 The two foremost leaders of an ISIS-inspired coalition that invaded the southern Philippine city of Marawi have been killed after almost five months of fighting, the county’s secretary of defense confirmed Monday, according to time.com.

Isnilon Hapilon, the designated emir of ISIS in the Philippines, and Omar Maute, a figurehead of a local Islamist insurgent group, launched an attack on the Muslim majority city on May 23. More than 1000 people, including over 800 militants, were killed in fighting since according to the Armed Forces of the Philippines.

Rumors of Hapilon and Maute’s death have periodically circulated in the past but on Monday Philippine Defense Secretary Delfin Lorenzana confirmed the latest reports to the Philippine Daily Inquirer.

Soon after, the Philippine Department of National Defense issued a statement confirming the deaths and indicating that the termination of hostilities was imminent.

Joseph Franco, a Singapore-based security expert tells TIME that the loss of Hapilon — a charismatic leader with religious credentials and military experience — is a major blow for ISIS in the Philippines. He added that a number of other militants are already clamoring to be named the next emir.

The duration of the siege should alarm Philippine officials and is symptomatic of the local proliferation of weapons, Franco says, but it is unlikely the Marawi model will be replicated elsewhere. “Marawi was the perfect storm. The built environment and the presence of armed caches were there even before ISIS existed. So while aspects of Marawi may be applied to other cities, you would not have a five-month long siege happening in other cities,” he says.

Recent photographs show a devastated city. Many of its buildings have been husked by shelling, and its streets are a tangle of rubble and mortar. Hundreds and thousands of people have been displaced as a result of the fighting.