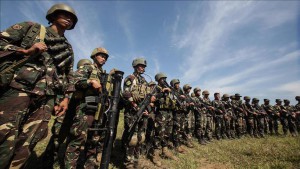 Authorities have raised the terror alert level in major cities nationwide as two suspected Daesh-linked militants were paraded before the media Thursday for a foiled bomb attack near the U.S embassy in Manila.

The raise comes after the military finally drove a Daesh-affiliated group whom the men have been linked to from a southern town after a week of intense fighting.

“Strong checkpoints should be expected… raids on suspected terrorist personalities and areas where they may hide,” he added.

ABS-CBN reported Dela Rosa as saying that the duo were part of an alliance of terror groups that include the Maute group, a Daesh-affiliate the government has been battling for seven days in the south.

He added that the suspects had confessed to planning the attack on Manila’s Roxas Boulevard to secure recognition and funding from Daesh, while diverting state forces from their ongoing offensive against Maute in Lanao Del Sur.

On Monday, police safely detonated an improvised explosive device the men are suspected of planting in a trash can meters from the embassy.

“Their motive was to loosen the operations against the Maute group,” Dela Rosa underlined.

Analysts have long linked both Maute and the Abu Sayyaf to Daesh, but on Monday the Philippines president officially acknowledged the relationship for the first time.

GMA News reported Col. Roseller Murillo of the 103rd Army Brigade as saying Thursday that troops have now driven the group from Lanao del Sur’s Butig town, where they had been holed up since Friday after seizing a building, a high school and a mosque, and hanging Daesh flags from buildings and houses.

In the weeklong operation to clear the area, 62 members of the group died and dozens of government troops were injured.

Murillo said that residents were still not allowed back in the area — which Maute also occupied earlier this year — as it had left booby-traps and improvised explosive devices (IEDs) behind.

He added that the military is now mulling permanent military deployment in Lanao del Sur to keep the group out.

The Abu Sayyaf is one of two militant groups in the south to have pledged allegiance to Daesh, prompting fears during a stall of a peace process between the government and the country’s one-time largest Moro rebel front that it could make inroads in a region torn by decades of armed conflict.