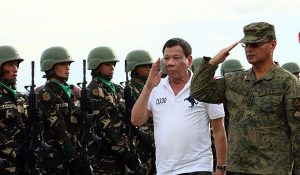 The Philippine President Rodrigo Duterte urged the country’s congress to extend the ongoing martial law in Mindanao until the end of the year, his spokesman said.

Duterte, in a letter to Congress, said the “existing rebellion” in Mindanao would not end on July 22, the 60th day in the limit prescribed by the Constitution, Inquirer reported.

“Upon a thorough personal assessment of the current situation in Marawi City and other parts of Mindanao and taking into account the reports and recommendations of the Secretary of National Defense as martial law administrator, the chief-of-staff of the Armed Forces of the Philippines (AFP) as martial law implementer and the chief of the Philippine National Police (PNP), I have  come to the conclusion that the existing rebellion in Mindanao which prompted me to issue Proclamation 216 on 23rd May 2017, will not be quelled completely by the 22nd July 2017, the last day of 60-day period provided under Section 18 Article VII of the 1987 Constitution,” Duterte said in a message read by Presidential Spokesperson Ernesto Abella in a Palace briefing.

“For this reason and because public safety requires it, I call upon the Congress to extend until 31st December 2017 or for such a period of time as the Congress may determine the proclamation of martial law and the suspension of the privilege of the writ of habeas corpus in the whole of Mindanao,” Duterte’s message added.

Duterte last week said he would not lift martial law before his second State of the Nation Address (Sona) on Monday, July 24.

The President met with lawmakers on Monday night in Malacañang to express his intent to extend his martial law decree.

The Congress will convene on Saturday to tackle the President’s request.