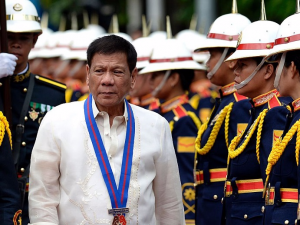 President Rodrigo Duterte confirmed the death of a high-profile Malaysian terrorist tagged by the military as a financier of the Marawi City siege, like reported by aa.com.tr.

He was referring to Mahmud Ahmad described by the military as one of the brains behind the Marawi siege.

Speaking at the 43rd PHL Business Conference and Expo in Manila, Duterte said the death of Mahmud completes the downfall of the Maute group leaders that fought it out with government troops.

“There were three of them—Isnilon Hapilon, Omar Maute, and Doc Mahmud. He was taken this Thursday afternoon and that completes the story,” said Duterte.

The President said the Malaysian Daesh militant, one of the brains behind the Marawi siege, and 19 Maute fighters were blasted to death inside their concrete hideout in a search-and-destroy mission in the main battle zone according to a report from Armed Forces Chief Gen. Eduardo Año.

General Año’s report was based on accounts by rescued hostages who informed the military that Mahmud is dead and was buried last Thursday night.

He said Mahmud was among the five key militant leaders who sought sanctuary among the Abu Sayyaf terrorists after a major crackdown on Daesh group in Malaysia.

According to Año, their goal to flush out and deal with terrorist stragglers has been relentless since the death of Isnilon Hapilon and Omarkhayam Maute.

About a dozen more terrorist stragglers remain in one of the buildings in the battle zone.

On Monday, President Duterte declared the liberation of Marawi City following the killing of two key leaders of the Daesh-linked terror group.Following Hapilon’s death, military intelligence officials said if Mahmud survived he would likely take over the leadership of Daesh-linked militants in Mindanao.

Armed Forces spokesman Restituto Padilla told reporters in Manila the Malaysian militant was the one responsible for the direct linkage of Hapilon to the larger group of the Daesh.

“It was he who provided the funding necessary to bankroll the siege of Marawi,” Padilla said.

In its July report, the Jakarta-based Institute for Policy Analysis of Conflict, which described Mahmud as a former university lecturer who sat on the inner circle of the Marawi command structure, stated that he controlled recruitment as well as financing and has been the contact person for any foreigner wanting to join the pro-Daesh coalition in the Philippines.”

Meanwhile, President Duterte said martial law in the southern Philippines would not be lifted until the government has neutralized all the terrorists in the region.

“When the time came, I declared martial law. Everybody is asking when will it stop? It will not stop until the last terrorist is taken out,” Duterte said.

Congress granted his request that martial law be extended until December 31. Troops were still pursuing around 20 remaining terrorists including Malaysians and Indonesians.