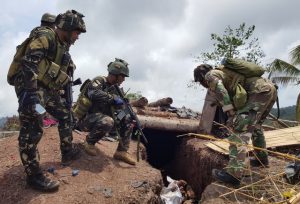 A Malaysian high-profile terrorist and thirteen remants of a Daesh-linked miltant group were reportedly killed Thursday in a military predawn assault in strife-torn Marawi City, like reported by aa.com.tr.

The report of the deaths of Mahmud Ahmad and the Maute terrorists was announced by Army Col. Romeo Brawner of the Task Force Ranao in a news briefing.
Accordingly, government forces are looking for his body in the uncleared buildings in the battle area in Marawi.

“As of this time, we are still trying to retrieve the 13 (slain terrorists), although we have recovered some of them already,” Brawner told newsmen.
“Our troops are still engaging them at their defensive positions in the snipers’ zone. Once we retrieved all the bodies of 13 slain terrorists, they will go through the process and that the SOCO forensic experts will be the one to determine the identities of all the cadavers,” he said.

Ahmad, tagged by the military as a financier and recruiter who helped put together the coalition of pro-Daesh fighters that laid siege to Marawi in May, is believed among the thirteen fatalities.
He was also put on Malaysia’s most-wanted list in April 2014 and had worked with the Abu Sayyaf group behind the kidnappings, beheading and bombings in Philippines south.

The 39-year-old Malaysian terrorist, who holds a doctorate in religious studies and was a university lecturer in Kuala Lumpur, was Abu Sayyaf leader Isnilon Hapilon’s second in command in the Daesh’ South-East Asia.
He was seen as the new ‘emir’ of pro-Daesh militants.

Last Tuesday, Armed Forces chief of staff Gen. Eduardo Año said Mahmud was still in the conflict zone and hiding in one of their hideouts after troops killed Hapilon, and Omarkhayam Maute, one of the key leaders of the Daesh-inspired terror group.
Since May 23, when the Maute attacked the city, 854 terrorists have been killed. On the government side, 163 soldiers and policemen have died, together with 47 civilians.

The military said there has been no change in the intensity of the current fighting compared to pre-liberation and it has not set any projection as to when it will totally clear the city of Maute members.

Año said prior to his death, Hapilon had offered millions of pesos to anyone who could facilitate his escape and that of his men who brought their family members with them to Marawi.
According to him, the terrorists looted some P1 billion in cash and belongings from banks and other structures, and buried these “so that after the siege, if they escape, they will come back for them.”
He said the number of holdover terrorists was between 20 to 30 being backed by Malaysian and Indonesian militants as of Tuesday.

President Rodrigo Duterte earlier declared the liberation of Marawi City from the Maute terrorists after nearly five months of fighting.