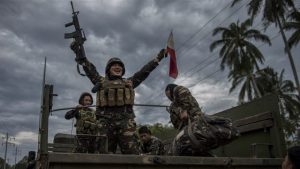 The Philippines’ Congress has approved President Rodrigo Duterte‘s request to extend martial law until the end of 2018 in the country’s southern region of Mindanao to “totally eradicate” ISILsupporters and communist fighters, like reported by aljazeera.com.

Wednesday’s move was approved by 226 legislators in the House of Representatives against 23 objections.

In the Senate, it had 14 supporters and four opposers, according to Rappler, a local online publication.

Duterte appealed for the extension on Monday in a letter to legislators, saying it was necessary to contain an ongoing rebellion by supporters of the Islamic State of Iraq and the Levant group (ISIL, also known as ISIS) and “the communist terrorists (CTs) and their coddlers, supporters, and financiers”.

Al Jazeera’s Jamila Alindogan, reporting from the capital Manila, said on Monday that some feared that Duterte might be “rehearsing” a nationwide enforcement of strongman rule.

The issue was raised by the legislators on Wednesday during the four-hour deliberations.

Duterte initially imposed military rule across Mindanao in May. It was limited by the constitution to 60 days, but in July, a five-month extension was issued until December 31.

Hundreds of gunmen had rampaged through Marawi in what authorities said was part of a campaign to establish a Southeast Asian caliphate for ISIL.

A US and Chinese-backed military campaign took five months to defeat the group, with the conflict claiming more than 1,100 lives and leaving large parts of Marawi in ruins.

Although Duterte declared in October that Marawi had been “liberated” and military chiefs said most leaders of the group had been killed, authorities have continued to warn that others who escaped are regrouping and recruiting in Mindanao.