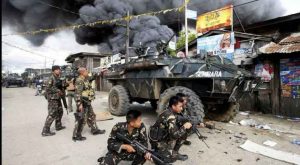 A bombing in a town on a restive southern Philippines island killed nine people and wounded dozens on Monday, among them soldiers and civilians, the military said, with radical extremists suspected of being behind the attack, like reported by thenational.ae.

Two explosions believed to be homemade bombs were triggered within one hour of each other in the main urban centre on the island of Jolo, a stronghold of the Abu Sayyaf, a militant group that has pledged allegiance to ISIS.

It was the biggest attack in the town since January last year, when twin suicide bombings before Sunday service at a Jolo church killed more than 20 people and wounded at least 100.

A faction of Abu Sayyaf was blamed for that attack, which Philippine authorities said involved Indonesian bombers.

The first blast on Monday happened about noon in front of a food centre, outside of which two military trucks were parked, the army said. A second blast followed, but there were no immediate reports of casualties from that incident.

Lt Col Ronaldo Mateo, a military spokesman, said the bomb was attached to a parked motorcycle.

There was no immediate claim of responsibility and police said an investigation was under way.

Abu Sayyaf was founded in the 1990s with its roots in a separatist cause that it has since abandoned. It is active in the Sulu archipelago of Mindanao, where hundreds of military have been deployed to try to destroy the group, which has been linked to ISIS and Al Qaeda.

The group’s various factions have grabbed headlines, most recently for suicide bombings, banditry, piracy and kidnap for ransom. It also has become notorious for beheading captives, among them westerners.