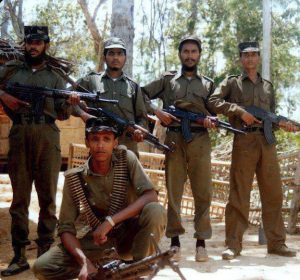 Philippines’ Secretary of National Defense Delfin Lorenzana said defenseministers from Australia, China, India, Japan, New Zealand, Republic of Korea, Russia, and the U.S. have raised the concerns and urged Myanmar to do more about the matter.

The UN said over 600,000 Rohingya refugees have fled Myanmar for Bangladesh since violence against the persecuted minority erupted in Rakhine state in August.
Lorenzana, who cited the statement of Myanmar defense minister Sein Win, said they are not actually trying to drive these people away, but are just trying to prevent the influx of other people coming from Bangladesh.

He said the concern of ASEAN is that these refugees might find their way into some terrorist camps and train, and then they will train the other camps in the region, and it will become a problem.

According to Lorenzana, some 200,000 more Rohingya refugees were driven to Malaysia while others are in Thailand and Saudi Arabia.

Mentioning the recent battles in the predominantly Muslim southern city of Marawi, Lorenzana called it “an eye-opener for all of us.”

“Marawi showed us in the defense department how woefully inadequate our capabilities are to face this kind of problem,” he said. “We had been in denial mode that they (Daesh) have access here until Marawi broke out.”

Lorenzana continued that over the past years defense officials in ASEAN have been in touch with their counterparts in the Middle East who are fighting Daesh, which had directed their fighters to return home in the Philippines, Malaysia, Thailand, Indonesia, and even Singapore.

The Filipino defense chief said the Middle Eastern officials had given names of these fighters to Filipino officials, and that they are very anxious to find out if they find their way back home.
Since October 2016, Myanmar’s army has been carrying out a military crackdown in Rakhine, where a large number of the Rohingya live.

The Rohingya refugees have been fleeing amid persecution at the hands of Buddhists and the military, as Myanmar refuses to recognize the mainly Muslim minority group as citizens.