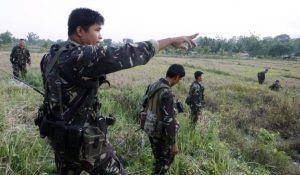 More than 30 members of a Daesh-linked group have been killed in recent operations in the Philippines’ troubled south, according to the military Tuesday.

Col. Cirilito Sobejana, Joint Task Force Sulu commander, told reporters that the military has made “significant gains” in intensified military offensives against the Abu Sayyaf in the majority Muslim island provinces of Sulu and Tawi-Tawi, like reported by aa.com.tr.

The Armed Forces of the Philippines launched an “all-out war” in January with the aim of putting an end to kidnapping-for-ransom and “terroristic activities” by the militant group.

“We continue what we have been doing… It’s a relentless and sustained operation that resulted in four major encounters wherein they [the Abu Sayyaf] incurred 32 dead and 22 wounded,” he said.

Sobejana underlined that troops have also captured around 50 “bandits”, recovered several assorted high-powered firearms and occupied “most” of the Abu Sayyaf’s strongholds.

“Actually almost all of them numbering about 435 are on the run, but with the recent encounters where they incurred several casualties I am sure their figure has reduced significantly,” he said.

Capt. Jo-Ann Petinglay, Western Mindanao Command spokeswoman, said that on the government side, only one soldier had been killed and 28 others wounded in separate clashes in Sulu and Tawi-Tawi since last year.

“The casualties suffered by the Abu Sayyaf bandits greatly affected their capability to conduct atrocities,” she said.

Meanwhile, Maj. Gen. Carlito Galvez, the command’s chief, recognized the help of the country’s one-time largest Muslim rebel group in the operations, describing the role of the Moro National Liberation Front (MNLF) as instrumental in some missions.

On Monday, top defense and security officials met with Muslim religious leaders, peace advocates, civil society organizations and other stakeholders in the south to address the Abu Sayyaf menace.

“They want to personally to see how they can help Sulu’s peace efforts, and to boost soldiers’ morale and award those government casualties either killed or wounded in the ongoing intensified offensives against the Abu Sayyaf group,” Galvez said.

Over 30 hostages are believed to be held by the Abu Sayyaf.

Late last month, a German hostage was beheaded by the group, with his body later found in Sulu.

The MNLF, and its breakaway group the Moro Islamic Liberation Front, is engaged in an ongoing peace process with the government in hopes of establishing a new autonomous region in the south.

The Abu Sayyaf is among the militant groups who have pledged allegiance to Daesh, prompting fears during a stall of the peace process that it could make inroads in a region torn by decades of armed conflict.