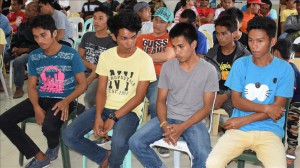 Eleven more members of a Daesh-linked group have surrendered to government forces in the Philippines south, military officials announced Monday.

The surrenders — including a sub-leader — bring the total of Abu Sayyaf members to hand themselves in to 34 since a government offensive ordered by President Rodrigo Duterte began in Basilan province in July.

In a statement Monday, Colonel Thomas Cirilo Donato, commander of the Philippine Army’s 104th Sultan Brigade, said the men surrendered themselves, assorted high-powered firearms and several ammunition and magazines in southern Sumisip town at around around 10.00 a.m. (0300GMT) Monday.

Donato added that the 11 would be referred to Autonomous Region in Muslim Mindanao Gov. Mujiv Hataman “for rehabilitation and integration into the mainstream of our society”.

In a separate statement, Major Filemon Tan Jr., spokesperson of the Western Mindanao Command, confirmed that among those who surrendered was sub-leader Moton Indama,

“Moton, second cousin of Furuji Indama, is the leader of more or less 20 Abu Sayyaf members operating in Tipo-Tipo, Basilan. His group is responsible for the laying of Improvised Explosive Devices (IEDs) along the Basilan Circumferential Road in Barangays Baguindan and Silangkum, Tipo-Tipo,” Tan added.

Indama has a multi-million bounty on his head and has been blamed for murder, kidnapping, deadly bomb attacks and the beheading of marines.

Army troops and marines have been engaged in offensives since Duterte ordered security forces to “destroy” the group, which is still holding several local and foreign hostages in southern Sulu province.

Since 1991, the Abu Sayyaf — armed with mostly improvised explosive devices, mortars and automatic rifles — has carried out bombings, kidnappings, assassinations and extortion in a self-determined fight for an independent province in the Philippines.

The group is notorious for beheading victims after ransoms have failed to be paid for their release,

It is one of two militant groups in the south to have pledged allegiance to Daesh, prompting fears during the stalling of a peace process between the government and the Moro Islamic Liberation Front rebel group that it could make inroads in a region torn by decades of armed conflict.