You are here: Home / West Asia / Philippine Muslim rebels warn of Islamic State threat in the south of the country as peace process stalls 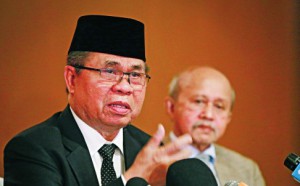 Islamic militants are trying to establish a stronghold in the violence-racked southern Philippines, the head of the nation’s biggest Muslim rebel organisation warned yesterday.

Gunmen pledging allegiance to the jihadists controlling vast swathes of Iraq and Syria have instigated a series of deadly battles with the army in the volatile southern Philippines since parliament blocked the peace push.

Violence has plagued the southern Philippines for decades during a Muslim separatist insurgency that has claimed about 120,000 lives.

“We cannot completely abandon armed struggle, but we always believe we have to give supremacy, primacy to the peace process because we believe the solution to the problem is still political,” Murad said.

“As long as the peace process has a chance to move forward then we don’t want to revert to violence again.”