You are here: Home / West Asia / Philippine Muslim rebels hand over weapons in push for peace 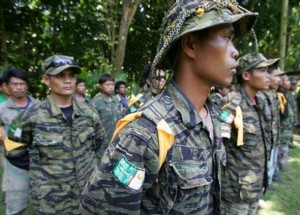 Aquino, who ends his six-year term in a year’s time, wants the Muslim self-rule bill to be passed soon, fearing that his successor may not pursue the peace initiative.

“Let us show them that we are worthy of their trust,” Aquino said in his speech.

The police officers were ambushed after they passed through MILF-influenced areas following a raid that killed Zulkifli bin Hir, a Malaysian militant and one of the most-wanted “terrorists” sought by the United States.

Work on the Muslim self-rule bill is expected to continue when parliament resumes on July 27, but congressional leaders have said it is unlikely to be passed before October.

The weapons will be stored in a secure area controlled by the decommissioning body.

Another 35 percent will follow after the law is ratified in a regional plebiscite, while the remainder will be handed over once the regional government is established and its leaders elected in May next year.

The 145 guerrillas retired on Tuesday will return to civilian life and receive assistance from the government, peace negotiators said.