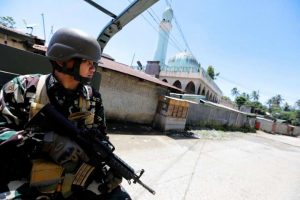 The Philippine military is looking to deliver one big punch that will end the occupation of Marawi City by local terrorists who have pledged allegiance to the Islamic State in Iraq and Syria (ISIS) militant group in Iraq and Syria, like reported by straitstimes.com.

But Gen Eduardo Año, the chief of staff of the Armed Forces of the Philippines (AFP), refused to say when his troops will throw the knockout blow at the gunmen from the Maute and Abu Sayyaf terrorist groups holed up in Marawi.

“While the Marawi siege (by the Maute-ISIS) is catastrophic, painstaking and destructive, the AFP, with our gallant soldiers, will ensure (it destroys) the entire group in one decisive major battle. We will not be pressured (or bound) by (deadlines). I will not talk about deadlines,” Año said on Sunday (July 2).

Fierce fighting between government troops and the terrorists enters its seventh week on Tuesday with the terrorists believed to have been contained in a square-kilometre pocket of the city.

The fighting has claimed the lives of 82 soldiers and policemen, 44 civilians and 303 terrorists, according to the latest count released by the military over the weekend.

The crisis began on May 23 when hundreds of gunmen waving the black ISIS flag rampaged through Marawi after a failed military attempt to capture Isnilon Hapilon, the Abu Sayyaf chief said to have been named by ISIS as its leader in South-east Asia.

President Rodrigo Duterte declared martial law throughout Mindanao to quell the terrorist plot and coral all the participants.

Video captured by the military showed leaders of the Maute and Abu Sayyaf groups planning an assault on Marawi, a predominantly Muslim city, to establish an ISIS enclave in the region.

A vigorous military campaign that includes airstrikes-conducted with surveillance help from the United States and Australia-has since reduced the terrorist force of 400-500 to just a little more than 100.

A brutal block-to-block, street-to-street, house-to-house, room-to-room clearing operation has driven the remnants of the terror force to seek cover in buildings in four villages in the city’s commercial centre, where they slow down the advance of government troops with sniper fire.

On Saturday, Año said, the military killed 10 Maute snipers, leaving just a little more than 100 gunmen for the troops to deal with.

But government troops cannot rush the gunmen’s positions, as the terrorists are holding hundreds of civilians, including a Catholic priest, and using them as human shields.

The terrorists are believed to be looking to use the civilians as bargaining chips to get out of Marawi after one of the Maute leaders, Abdullah Maute, last week spoke to emissaries about trading the priest, Father Teresito Suganob, for his parents and relatives who had been captured by police.

The government has rejected any talks with the terrorists.

It seems, however, that some groups do not want group’s help.

The officer said most of the followers who joined the fighting in Marawi were from Camp Pukta in the town of Balindong in Lanao del Sur.

“It’s negative, baseless. They did not join the Maute in Marawi,” Ameen told the Inquirer by phone. “As far as we know, he (Macapaar) is in control of his men. Don’t entertain the report,” he said.