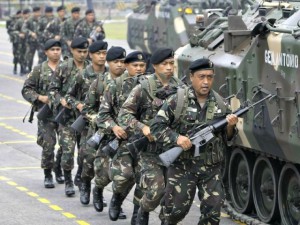 At least 13 Islamic State-linked jihadists were killed by the Philippine Army this past weekend during a major offensive in the southern part of the country.

The Philippine military also lost 18 soldiers in fierce clashes against members of Abu Sayyaf, which has pledged allegiance to the Islamic State (ISIS/ISIL).

Maj. Filemon Tan, a spokesman for the Philippine army, confirmed that “18 soldiers were killed and 53 were wounded” in the ten-hour battle on Saturday, Reuters reports.

“The killings occurred as the Philippines marked its Day of Valor holiday to remember its war dead,” notes the Associated Press (AP).

Five jihadists were killed on Saturday, including Mohammad Khattab, a Moroccan.

On Monday, AP quoted Maj. Tan as saying that “four Abu Sayyaf gunmen who were wounded in battle Saturday later died, and four other militants were killed in fresh fighting Sunday in the hilly outskirts of Tipo Tipo town on Basilan island,” bringing the number of fatalities incurred by the ISIS-linked group to thirteen.

Tan reportedly revealed that the Moroccan “was wearing a suicide vest rigged with pipe bombs when he died.”

The United States has offered a reward of up to $5 million for information leading to the capture and prosecution of Abu Sayyaf commander Isnilon Hapilon, considered a key target of the operation over the weekend.

A top commander from the ISIS-linked group was reportedly wounded along with at least20 other members.

More than 1,500 army troops are involved in the offensive, including ground forces pursuing Abu Sayyaf gunmen on Basilan, a poor, predominantly Muslim province, about 880 kilometers (550 miles) south of Manila. The Abu Sayyaf was founded there in 1991 as an extremist offshoot of a decades-old Muslim separatist rebellion in the south, homeland of minority Muslims in the predominantly Roman Catholic country.

Many of the Abu Sayyaf jihadists were armed with M203 grenade launchers and were able to gather between 100 and 150 fighters on Saturday alone.

On Monday, the Philippine army defended its weekend offensive.

“Military spokesman Brigadier-General Restituto Padilla said the troops had been adequately trained and the operation had been well coordinated, but they had been lured into a trap of improvised landmines that could not have been anticipated,” reportsReuters.