You are here: Home / West Asia / Philippine: 10 hostages in the hands of Islamist Abu Sayyaf in Sulu 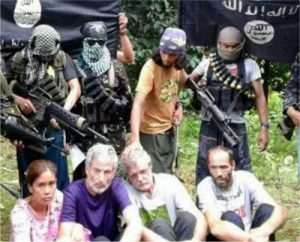 Abu Sayyaf terrorists are still holding 10 hostages, four of them foreigners, in the southern Philippine province of Sulu, according to a military official.

In a phone interview with reporters, Brigadier General Cirilito Sobejana, commander of Joint Task Force Sulu, said one Dutch, three Indonesians, and six Filipinos are still in the hands of the local terrorist group.

Despite this, Sobejana said operations against the Abu Sayyaf are ongoing although their priority is the safety of the hostages.

Sobejana said President Rodrigo Duterte is satisfied with the performance of the military in fighting the local terrorists and ensuring peace and order in Sulu.