You are here: Home / Africa / ‘Phase one over’ in Boko Haram battle, say Chad-Niger forces 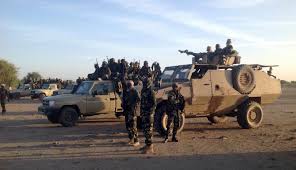 African coalition forces say the first phase of the offensive against Boko Haram is over following last week’s successful recapture of a strategic border village in northern Nigeria – the latest to be liberated from the militant group.

Euronews correspondent Luis Carballo has been embedded with the African military, and saw first hand what remained of Malam Fatori, near the border with Niger, and which Boko Haram was using as a base to direct attacks north into Niger and east into Chad.

The military chiefs from Niger and Chad, whose forces liberated the village, held a joint news conference.

They want Nigeria to do more. The Chadian President Idriss Deby has bitterly criticised Nigeria for being absent in the fight against Boko Haram.

“We need to co-ordinate with Nigeria because the joint Chad-Niger force has no mission to deal with the captured areas. It is now up to our Nigerian partners – both military and civilian – to take possession of these areas and manage them,” said General Seyni Garba, Joint Chief of Staff of Niger’s armed forces.

The two generals estimate the Islamist militia is not completely destroyed but has lost its capacity to launch large-scale attacks.

“The main towns which Boko Haram occupied are (now) in the hands of the military forces from the three countries (Niger, Nigeria and Chad). Boko Haram’s capacity to cause trouble has been reduced, I wouldn’t say to nothing, but it has been reduced as much as possible,” said General Brahim Seid Mahamat, the Chadian military’s Joint Chief of Staff.

Malam Fatori resembles a ghost town: streets are deserted, houses have been burned. But slowly the villagers who fled the fighting are coming back.

Euronews’ correspondent saw no men, only women – mostly old – and children, with tales of how harsh life was under Boko Haram, which imposed its strict interpretation of Islamic Sharia law using brutal methods.

The Chadian army claims hundreds of militants were killed in the 24-hour battle to retake the village, with the loss of nine of its own soldiers.

Euronews was unable to confirm the figures as the bodies of the Boko Haram fighters were being guarded several kilometres into territory where there was a risk of ambush.

Hundreds of soldiers and armoured vehicles from the Chad and Niger armies are stationed one kilometre away from Malam Fatori.

Spirits were high in the camp, Luis Carballo reported, with soldiers feeling they are winning the fight against the rebels. The joint Chad-Niger force now controls around half a dozen towns which had been occupied by Boko Haram.

The troops showed euronews a stock of weapons which the Chadian army claimed had been taken from Boko Haram fighters killed during the battle for Malam Fatori.

There were around 50 Kalashnikovs, some labelled “Nigerian Army” – implying they had probably been taken by the militants during assaults on Nigerian army bases.

Boko Haram affiliated to the self-proclaimed Islamic State group at the beginning of March, but euronews saw no ISIL flags in the village. There were many burned-out motorbikes: the machines are well known for being used by Boko Haram in fast ambush-style attacks, especially at night.

The militants have killed thousands of civilians in such attacks, in Nigeria, Niger, Chad and Cameroon. All four countries are fighting Boko Haram, which has been destabilising the region for more than a decade.

In Malam Fatori some residents fear the militants could return if the Chadian and Nigerien soldiers leave.

But, says Luis Carballo, for the first time in many years, the jiihadists are losing ground.