You are here: Home / MidEastGulf / Peshmerga’s International Brigade: From IT workers to ex-soldiers, the men from the West teaming up with Kurdish forces to fight ISIS 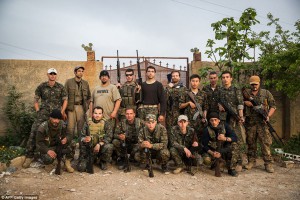 A legion of foreign fighters who bravely joined the Kurdish forces battling militants loyal to the Islamic State have posed for photographs in Syria.

Showing off their tattoos, play fighting with one another and relaxing in a camp, the international fighting force appear incredibly relaxed – despite fighting on the frontline against the terror group.

Dozens of fighters – many of them ex-soldiers in the British and America armies – have volunteered to join Kurdish troops battling ISIS in Iraq and Syria in recent months. As many of the Kurdish fighters do not speak English, the foreign soldiers usually form new English-language regiments.

The majority of the Western fighters travelling to Middle East to battle ISIS have joined the YPG, or People’s Protection Units, a Kurdish militia who are based in northern Syria.

Perhaps the most famous of the YPG-affiliated foreign legions are the so-called ‘Lions of Rojava’, whose flag Western soldiers such as Britons Jamie Read and James Hughes, and Americans Jordan Matson and Joshua Bell, are believed to have fought under.

The men in the most recent pictures are all members of the YPG, although other Westerners are known to have joined the Peshmerga forces fighting ISIS over the border in northern Iraq.

To protect their identities and build loyalty among the group, the Westerners all adopt Kurdish nom de guerres while fighting alongside local forces.

These pseudonyms typically include the word ‘Heval’ which means friend in the Kurdish langauge.

There is often confusion in the West about the Kurdish fighters battling ISIS, not least because the Kurdish word for a military force is ‘peshmerga’, which translates as ‘those who confront death’.

While the YPG in Syria are therefore technically peshmerga, the Kurdish military in neighbouring Iraq are actually called Peshmerga and led by the President of Iraqi Kurdistan, Masoud Barzani.

In the latest photos released by the foreign fighters who have joined the YPG, dozens of men from all manner of background are seen going about their daily business and posing for photographs.

In one shot a 67-year-old Canadian fighter who goes by the name Heval Zinar and a 40-year-old British man nicknamed Heval Cudi are seen sparring and play fighting with one another under the blazing northern Syrian sun.

The men practice the kind of hand-to-hand combat that will be vital should they face an ISIS militant without a weapon to defend themselves.

Despite being 67, Heval Zinar appears incredibly fit and as he stands in full combat gear with an assault rifle in his hands, it is clear the Canadian national boasts the kind of physique a man a third of his age would be proud of.

In another shot reminiscent of something from the First World War, a 21-year old from the UK known as Hewal Sores and a American calling himself Hewal Agir are seen sitting in a muddy trench with their rifles in the hands as they guard a military checkpoint.

Another photograph shows a 38-year-old American national calling himself Hewal Cekdar wearing a khaki T-shirt emblazoned with the word ‘Infidel’ in both English and Arabic, in a show of defiance in the face of ISIS’ brand of Islamic extremism.

The images emerged as it was revealed that Iraq security forces have recaptured areas lost last week to ISIS in and around the battleground city of Ramadi.

According to police Major Omar al-Alawni, government forces regained control of the city’s Pediatric and Maternity Hospital and the surrounding neighborhood late Monday night after fierce clashes with IS militants. The hospital is located about 500 meters from a complex of government offices.

This morning, Iraqi troops were engaged in intense clashes in an offensive to regain control of Soufiya, one of three villages that fell into the hands of ISIS last week, said police Col. Mahdi Abbas.

Both officials said the battles turned in favor of government forces after the arrival of reinforcements and weapons from Baghdad. At least 12 militants were killed in the clashes overnight, they said.

Footage showed military black Humvees advancing in a residential area in Ramadi and Iraqi soldiers firing their rifles while taking shelter behind a wall.

The security situation in Ramadi, the capital of Anbar province, sharply deteriorated after ISIS seized Soufiya and the two other villages, Sjariyah and Albu-Ghanim, forcing thousands of civilians to flee their homes.

Elsewhere in Iraq, police said a bomb exploded Tuesday in a commercial street in the town of Madain, just south of Baghdad, killing three people and wounding four. Later in the day, a roadside bomb hit a police patrol in the capital’s western suburbs, killing two policemen and also wounding four.

Medics in nearby hospitals confirmed the casualties. All officials spoke on condition of anonymity because they were not authorized to speak to the media.

Fierce clashes between Syrian government forces and opposition fighters in the country’s south killed dozens on both sides over the past two days as rebel factions regained much of the ground they lost earlier, activists said this morning.

The Britain-based Syrian Observatory for Human Rights said the fighting, which began yesterday in the southern province of Daraa, killed 37 rebels as well as 22 government troops. This morning, the Syrian air force struck several areas in Daraa province, the Observatory said.

Opposition fighters and members of Syria’s al-Qaida-linked Nusra Front have made major gains in southern Syria in recent weeks, capturing large swaths of territory and a border crossing point with Jordan.

On Tuesday, Daraa-based activist Ahmad al-Masalmeh and the Observatory said that a counter-offensive by opposition fighters has clawed back most of the territory lost the previous day. He also said the rebels were able to capture several soldiers and pro-government gunmen.