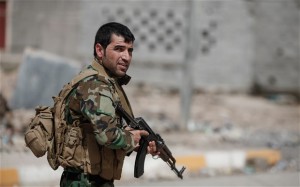 In a major operation against Islamic State (IS) militants on the southern and western Kirkuk frontlines September 30th, Kurdish Peshmerga, backed by international coalition jets, killed hundreds of jihadists.

Director of Kirkuk police Brig. Gen. Sarhad Qadir confirmed to BasNews that the Peshmerga, police and security forces of Kirkuk took control of several villages on the outskirts of the city.

He revealed that hundreds of IS insurgents were killed during the offensive but their nationalities remain unknown.

At least seven villages were cleared of the jihadists yesterday, and situation in the area is now calm.