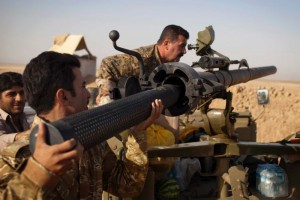 Hundreds of Islamic State, or ISIS, militants were beaten back on Sunday in a midnight attack on Peshmerga-controlled villages in the south of Kirkuk province.

A Peshmerga officer who spoke to Rudaw said the Islamic State, or ISIS, was defeated and did not capture any territory in the intense fighting.

“More than 600 ISIS fighters launched an attack on Talwra, Big Homeyra, Small Homeyra, Al-Murra and Shahid villages but they have been defeated by Peshmega,”said a Peshmerga officer who gave his name only as Rasul.

Raswl said the Kurdish forces with the aid of airstrikes from the US-led coalition and were able to defeat the ISIS attacks. He said heavy fighting is still going on in Murra village. It is estimated that more than 100 ISIS fighters have been killed and injured in last night’s battles.

The ISIS forces attempted to control the Syryani oil refinery in southeastern Kirkuk but Peshmerga were able to destroy two ISIS Humvees and and defend the cluster of villages.

Kamal Kirkuki, an official from the Kirkuk frontline told Rudaw the Peshmerga are well prepared and they have defeated ISIS attacks in different districts.

The frontline in the east of Kirkuk province is under Peshmerga control, Kirkuki said.