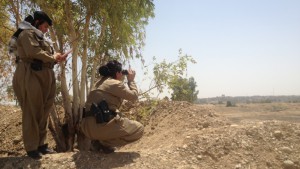 The Kurdish Peshmerga forces have been providing intelligence about Islamic State (IS) bases and weapons caches to coalition jets.

A Peshmerga source from the frontline told BasNews, “The Peshmerga send details about IS to coalition jets, which is used to destroy militants’ bases.”

The source added, “An IS base destroyed in the area contained a large cache of ammunition.”

International forces have developed strong cooperation with the Peshmerga forces on the frontlines against IS militants, seeing the Peshmerga as their ‘boots on the ground’.