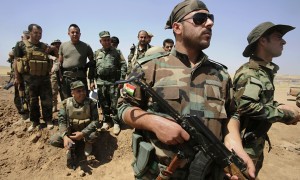 Spokesperson for the Iraqi Shi’ite militia group known as Popular Mobilization Forces or Hashd al-Shaabi, Kareem al-Nouri has highlighted the need for the Kurdish Peshmerga forces to fight against Islamic State (IS) as they share a common enemy.

Al-Nouri revealed to BasNews that the Shi’ite militia is made up of over 65,000 fighters with tens of thousands more will to enlist, but limited budgets prevent them from expanding their forces.

Concerning his group’s failure in liberating the Iraqi western province of Anbar, al-Nouri claimed that US intervention has delayed the operation because Washington wants the glory of liberating Anbar alone.

“Also, there are thousands of civilians living in the IS-held areas which make the operation more complicated,” Al-Nouri added.

He said that the Peshmerga must take part in the anticipated operation to liberate Mosul and Hawija as they have previously proven their strength by defeating the jihadists in Hawija and Jalawla.

Regarding the future of Shi’ite militia groups while the Iraqi government is creating the Iraqi National Guard, al-Nouri claimed that no other alternatives can replace the Shi’ite militias as they have already demonstrated their effectiveness in the country.

The Shi’ite official rejected reports accusing the group of committing war crimes in Sunni areas and pointed out that some Sunni tribal forces fought alongside Shi’ite forces to drive back IS insurgents from Sunni areas, “and they can prove the opposite of the allegations.”