You are here: Home / MidEastGulf / Peshmerga kills 20 IS militants, tunnel filled with weapons 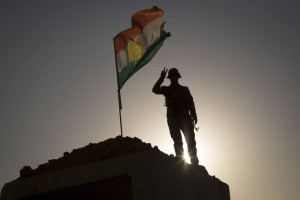 Sarbast Trwanshi, a Peshmerga Commander on the Nawaran front line, told Kurdistan24 that on Sunday morning until the evening, Peshmerga artilleries attacked IS locations in northern Mosul.

“The bombardment had killed 20 IS militants and destroyed five underground tunnels,” Trwanshi said.

He also mentioned one of the tunnels were full of different weapons and military equipment.

Additionally, he revealed Peshmerga had destroyed three IS military bases.

The Peshmerga Commander noted that from the beginning of the bombardment on IS’ bases, the US-led coalition warplanes shelled the jihadist group in Shallat, Khorsibat, and Barima in northern Mosul.

According to Trwanshi, the insurgents lost control over the territory in the area, stating the intelligence information shows the militants called for help from the center of Mosul but received no support.

The Kurdistan Region shares over 1,000 kilometers (620 miles) of its border with the jihadist group.

Peshmerga has been one of the most efficient ground force in defeating the group and liberating large swaths of territory in northern Iraq.

In June 2014, IS emerged in Mosul, the second largest city in Iraq, and occupied large areas from Nineveh, Diyala, Salahaddin, and Anbar provinces.

The military sources reveal the group has lost over 50 percent of its territories that it once controlled.

Moreover, the insurgents have reportedly lost the morale of fighting against Peshmerga and Iraqi security forces.