You are here: Home / MidEastGulf / Peshmerga kill over 50 IS militants on western Mosul frontline 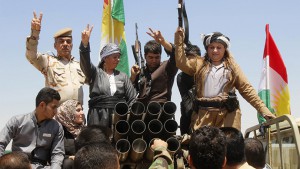 The Kurdish Peshmerga have countered an Islamic State (IS) attack in Kaske, killing at least 50 IS insurgents in the process.

Peshmerga Commander on the Kaske frontline Kamaran Hawrami told BasNews that on Sunday night, an attack by over 50 militants was successfully repelled with the assistance of coalition airstrikes.

“They had a plan to raid the Peshmerga frontline in Kaske, but their plan was discovered and eventually they were all killed,” said Hawrami.

Photos and identities will be revealed to the media soon, he said.

Kaske is located to the north of Mosul. Peshmerga forces in the area have regularly defeated IS attacks, inflicting heavy damage.

Following the liberation of Sinjar by Kurdish forces in coordination with the international coalition, IS insurgents have launched frequent attacks on Peshmerga around Mosul.