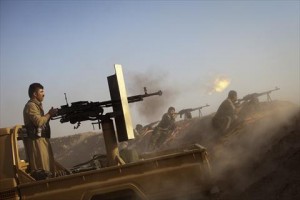 An official of the Kurdistan Democratic Party announced, that five suicide elements have been killed in clashes with the Peshmerga in east of Mosul.

Saeed Mamouzini, an official of the Kurdistan Democratic Party (KDP) in Mosul, informed IraqiNews.com, “The Kurdish Peshmerga forces managed to repel an attack by ISIS elements against one of the sites of the Peshmerga in the area of al-Nouran in east of Mosul,” pointing out that, “The violent clashes between the two sides resulted in killing 5 suicide elements of ISIS.”