You are here: Home / MidEastGulf / Peshmerga Forces enter in Sinjar and now they control main highway between Mosul-Raqqa 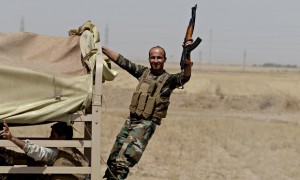 A Yazidi Peshmerga commander says that the Peshmerga have entered the town of Sinjar, more than 50 percent of which has already been taken back from Islamic State (IS).

Sheikh Shamo, also a Yazidi KRG MP, told BasNews from his position in the football stadium at the northern entrance to the town, that the jihadists are fleeing south.

The commander said that 14 units of Kurdish Yazidi volunteers, trained by the Peshmerga, are taking part in the operation.

Another Peshmerga Yazidi commander, Qassim Darbo, told BasNews that Peshmerga forces have cut off the main road between Mosul and Raqqa in Syria, known as Highway 47.

According to the Kurdistan Region Security Council, on the west Sinjar front, Peshmerga forces have secured Gabara village and now control a stretch of Highway 47 between Sinjar and Syria.

The KRSC also revealed that up to 600 IS militants are believed to be in Sinjar due to recent reinforcements, including foreign fighters.

Latest reports from the ground suggest that the Peshmerga forces have entered the Sinjar cement factory in the north of the town.