You are here: Home / MidEastGulf / Peshmerga forced to create Special Unit to deal with Daesh mines in Mosul 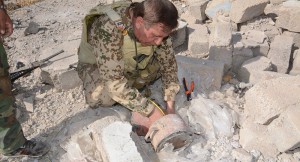 On Monday, coalition forces resumed their offensive against Daesh in the jihadi-held city of Mosul following a weekend pause. Speaking to Sputnik, Peshmerga demining unit commander Lokman Serafettin warned that the coalition has discovered a new Daesh strategy: the use of mines in civilian areas.

As the anti-Daesh coalition, led by Iraqi government troops and Iraqi Kurdish Peshmerga forces, continues its advance on Mosul, they have discovered a new jihadi tactic: the use of mines, mine-based booby traps and other explosives in civilian areas. The militants are laying explosives along highways used by Iraqi and Kurdish militia forces, as well as villages on the outskirts to the city, where battles are currently taking place. Explosives are being laid on the ground, at the doorsteps of homes, in refrigerators and anywhere else the jihadists can think to place them.

Peshmerga and Iraqi army representatives recently told a Sputnik correspondent that explosions of mine traps laid by the jihadists in the countryside to the east, north and south of Mosul have already killed 12 civilians, 4 Peshmerga fighters and 7 Iraqi government troops, and injured two dozen more people.

In response, both Peshmerga and the Iraqi army have begun a campaign to demine areas liberated from the terrorists. Special demining teams start their work immediately after the towns and villages are freed. After examining a house, sappers hang a white flag over it to indicate that it has been checked for mines and explosives.

Speaking to Sputnik Turkey, Lokman Serafettin, the commander of a Peshmerga demining and bomb disposal unit involved in the operation to liberate Mosul, explained that as things stand, the Daesh mines are a threat first and foremost to local civilians.

“The jihadists are losing their fighting capacity,” the officer stressed; “they no longer have the strength to fight in open encounters, and so they have begun to actively use mines and mine-based booby traps. The biggest problem is that they are mining territories inhabited by civilians. This leads to a lot of accidents, where people returning to their villages come back to their homes, triggering the explosive devices.”

Accordingly, Serafettin noted, “in order to neutralize the many mines laid by the jihadists, we have created a special detachment of sappers which conducts clearance and demining of territories liberated from Daesh. To date, our squad’s experts have defused over a hundred mines and mine traps in the area of operations.”
The coalition effort to retake Mosul began on October 17. Over 30,000 Iraqi and 4,000 Kurdish fighters, together with Shiite militia and about 5,000 US troops and air power, are taking part in the offensive. Observers, including the UN Office for the Coordination of Humanitarian Affairs, fear that the operation to liberate the city could lead to a massive ‘humanitarian disaster’, particularly if civilians attempt to flee the city in large numbers amid coalition artillery and air attacks. At the same time, defenders of the operation have said that Daesh is already engaged in the mass killing of civilians, and that the sooner the city can be taken back, the better.

On Monday, an Iraqi military spokesman said that the army had advanced to less than a kilometer from Mosul’s city limits after liberating nearby villages.