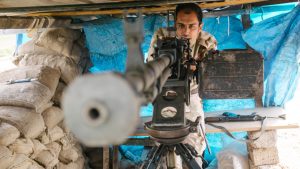 Kurdish Peshmerga Forces repelled an Iranian-backed Shia Hashd al-Shaabi militia assault near the town of Rabia, northwest of Mosul, like reported by kurdistan24.net.

“Peshmerga have destroyed two armored badger vehicles and a Humvee used by the militia,” Peshmerga Commander Mansour Barzani, who is currently on the front lines, told Kurdistan 24. “Following the defeat, the militia retreated.”

The attack took place on Tuesday morning in the village of Mahmoudiya, near Rabia, according to the Peshmerga Commander, who is also President of the Kurdistan Region Masoud Barzani’s son.

Iraqis Forces were alongside the PMF when they launched the attack on Kurdish Forces in the disputed area.