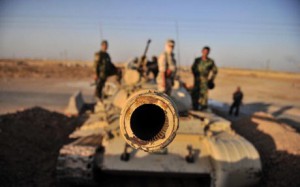 According to Peshmerga commanders in Kirkuk province, an estimated 90 percent of disputed territories are now under the control of Kurdish forces, marking a significant advance in trying to implement article 140 of the Iraqi Constitution.

Following the surrender and departure of Iraq’s army from these territories—after the swift takeover of Mosul by Islamic State militants—Kurdish Peshmerga forces were deployed along the disputed areas to “fill the power vacuum,” Kurdish military officials have said.

According to Peshmerga commanders, at least 36 villages—one district and three areas—inhabited by people brought to the region during the “Arabization” campaign of former Iraqi President Saddam Hussein, have been recaptured from ISIS militias by Kurdish forces in Kirkuk province.

“We took military and security steps to protect the disputed areas… now we are closer than ever to implementing article 140,” a Kurdish Peshmerga commander told Rudaw Monday. He added that the Peshmerga expect Kurdish leaders and politicians to take final steps in order to implement the article.

Article 140 of the Iraqi Constitution defines disputes areas as territories previously inhabited by Kurds and later “Arabicized” by transferring and settling Arab tribes in the region.

The Constitution requires that Iraqis displaced by “Arabization” be compensated and moved back to their original areas, a process that many Arabs, who have lived in disputed areas for decades, have resisted. Kurds see article 140 as a way to remedy the injustices of “Arabization” policies and strengthen the Kurdistan Region, but the article is among the most contentious in the Constitution.

Earlier this month, the Kurdish Ministry of Peshmerga released a statement and declared that except for some areas, “the entire Kurdish territories outside of the Kurdistan Region were now in the hands of Kurdish forces.”

The statement added “the Kurdish troops have no intention of leaving the area” and were “here to stay.”

“Basically, all Kurdish villages and localities are now protected by the Peshmerga forces,” it continued.

Shakhawan Abdullah, a Kurdish lawmaker and a member of the Iraqi Security Council, announced Monday steps are being taken to return back the farm lands of the disputed areas to their Kurdish owners, adding that “it would be a helpful step in resolving problems within disputed territories.”