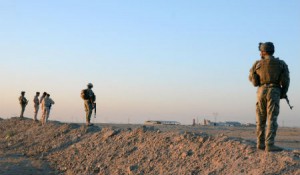 A source in Peshmarga forces in Nineveh province said on Thursday, that his forces repelled this morning an attack by ISIS terrorists near Mosul strategic Dam, located western the province, and killed more than 20 of them and destroyed a number of their vehicles, wrote Shafaaq .

The source who is a military field commander in Peshmarga said in an interview with “Shafaq News” that” The militants of ISIS terrorist organization launched on Thursday morning an attack on Peshmarga sites, using heavy and medium weapons, noting that Peshmarga foiled the attack and killed more than 20 ISIS elements, as well as the destruction of a number from their vehicles.

Iraqi security forces andPeshmarga have launched large-scale military operations with air support from the international coalition forces to regain control of areas dominated by ISIS terrorists after the events of Mosul in June of last year in Nineveh , Salahuddin, Kirkuk , Diyala and Anbar provinces.