You are here: Home / MidEastGulf / Perils ahead for Turkey’s possible anti-ISIL ground offensive in Syria 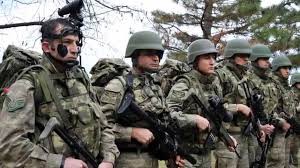 While the Turkish media is abuzz with talks of a possible ground operation against the terrorist Islamic State in Iraq and the Levant (ISIL) in Syria by the Turkish military, security experts and former military officials warn of risks and perils attached to that operation.

His remarks are interpreted as the strongest sign over Turkey’s resolve against the radical militant group amid new deployments of Western and US aircraft at İncirlik Air Base for a large-scale new air campaign against ISIL in Syria and Iraq.

But the Turkish military, which is traditionally reluctant to take a more active role in Syria’s combustible battlefield, has firm conditions before undertaking any sort of incursion into foreign territories and is seeking strong legitimate ground for an operation — a UN decision or a collective action by NATO.

In the face of recent signals from Ankara, former military officials have offered a cautious and sober assessment of the risks associated with an intervention in Syria, urging a calm and thorough analysis of all factors before a move.

Retired Assistant Col. İsmail Yılmaz believes any unilateral action without UN or NATO would plunge Turkey into a quagmire in Syria.

On Wednesday, President Recep Tayyip Erdoğan said at a business group meeting in Ankara Turkey will bring the issue of Iraq and Syria to the G-20 summit in Antalya next week and wants world leaders to discuss the creation of a safe zone in Syria.

He said Turkey’s allies are coming closer to the idea of forming a safe zone. He added issues of a “zone free of terrorist elements” and a “no-fly zone” will be discussed at the G-20 summit.

According to diplomatic sources that spoke to Today’s Zaman, Ankara will propose the US-led anti-ISIL coalition launch a coordinated air and ground operation to free the Syrian side of the Turkish border of ISIL elements.

Recent talks with Ankara’s security and diplomatic sources suggest preparations are under way for an operation to liberate the northern Syrian border town of Jarablus from ISIL.

Of the concerns over the situation in northern Syria, the expanding Kurdish influence is singled out as the most urgent one for Ankara and the Justice and Development Party (AK Party) government wants to prevent main Kurdish political party the Democratic Union Party (PYD) and its armed wing the People’s Protection Units (YPG) from expanding its reach beyond the west of Euphrates.

Ankara has declared any crossing by the PYD beyond west of the Euphrates as a “red line,” vowing to strike the group should it attempt to expand further west to Jarablus.

For Yılmaz, Turkey’s unilateral foray into the complex battleground of Syria may have inadvertent and unintended consequences such as risky encounters, even clashes, with the other combatants on the ground, Russia, Iran and Hezbollah.

He said Turkey might not be able to withstand the financial, diplomatic and military cost, with likely high casualties, of such an operation.

Yılmaz thinks an intervention without the endorsement of a UN decision may give Syria a legitimate cause to declare war against Turkey. Even an operation along with an international coalition may prove to be too costly for Turkey, he argues, because of the financial, military and political crises it may trigger due to Turkey’s close geographical proximity to the conflict zone.