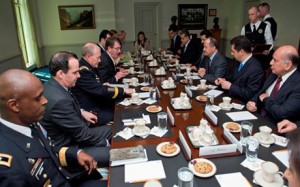 “I understand that some on Capitol Hill would like to bypass the Iraqi government and directly arm the Kurds and some Iraqi tribes,” Carter said Thursday at a joint news briefing with Army Gen. Martin E. Dempsey, chairman of the Joint Chiefs of Staff.

“But we oppose such a move, because we believe a unified Iraq is critical to the long-term defeat of ISIL and because it could put some of our personnel at risk,” he added.

Some congressmen and senators have introduced a bill that authorizes direct shipment of weapons for Kurds. A provision of the 2016 National Defense Authorization Act (NDAA) asks that 25 percent of the budget to Iraq be directly delivered to Kurdish and Sunni forces.

Reports say the Obama administration is working hard with Congress to scrap the provision.

During Kurdistan Region President Masoud Barzani’s visit to Washington this week, Carter met with him and the minister of Kurdish Peshmerga forces. Discussions focused on strategies to counter ISIS and victories against the group.

“I met with Iraqi-Kurdistan Region President Masoud Barzani. We talked about our progress in the fight against ISIL. I recognize the sacrifice that all Iraqis have made in this struggle, and congratulated him on retaking territory loss to ISIL,” the Pentagon chief said.

“We reaffirmed our commitment to working together by, with, and through the government of Iraq to deliver a lasting defeat to ISIL.”