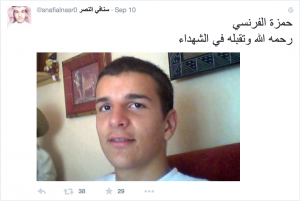 The Pentagon confirmed today that David Drugeon, a French bombmaker who reportedly belonged to al Qaeda’s so-called “Khorasan Group” in Syria, and Abu Bakr al Turkmani, a senior Islamic State (or ISIL) leader, have been killed in airstrikes.

Jihadists, including an al Qaeda leader known as Sanafi al Nasr, reported earlier this month that Drugeon had met his demise. However, Nasr has a mixed track record when reporting on the fate of his comrades. And there were erroneous reports of Drugeon’s death in the past, so the news was unconfirmed. (A screen shot of one of Nasr’s tweets honoring Drugeon as a “martyr” can be seen on the right.)

Pentagon spokesman Peter Cook told the press that Drugeon was killed in a July 5 airstrike near Aleppo, Syria.

“As an explosives expert, [Drugeon] trained other extremists in Syria and sought to plan other attacks against Western targets,” Cook said, according to Agence France Presse (AFP).

AFP reports that Abu Bakr al Turkmani “died Sept. 10 in a strike in Tal Afar in northern Iraq.” Al Turkmani “was an ISIL administrative emir, he was part of Al Qaeda in Iraq before joining ISIL and was a close associate to multiple ISIL senior leaders in Iraq,” according to Cook.