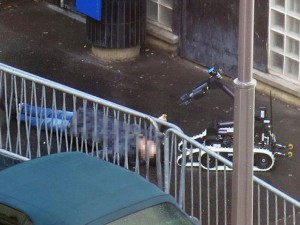 French police shot and killed a knife-wielding man who shouted “Allahu Akbar,” or “God is Great,” while trying to enter a police station in northern Paris Thursday, the government said, exactly one year after a terrorist attack on the offices of satirical weekly Charlie Hebdo.

The unidentified man, who had a pouch attached to his coat that was showing wires, ran up to police officers guarding the station wielding a weapon before he was shot two or three times, an interior ministry spokesman told BFMTV. Police at first believed the pouch might have contained an explosive device.

A photograph taken by a New York Times reporter near the site, and shared on Twitter, showed a man lying on the pavement in front of the police station. Another photograph posted by Belgian media Le Soir showed a large knife, or cleaver, nearby.

“According to the information that has been passed on, the man acted alone,” said the spokesman, Pierre-Henry Brandet. “We must be extremely cautious. It’s too soon to talk about a terrorist attack.”

Minutes after the thwarted attack, police holding assault rifles locked down the “Goutte d’Or,” an immigrant-heavy neighborhood near the Sacré Coeur Basilica and Montmartre — an area normally swarming with tourists. Residents unable to go home shared photographs on Twitter of the wide police perimeter.

The interior ministry spokesman said police were not looking for other suspects in flight. But there was a possibility that he had acted with accomplices, added Brandet.

Less than two months after a series of terrorist attacks that killed 130 people in Paris, France is still under a state of emergency that grants police sweeping powers to stop, search and detain terrorism suspects at any hour of the night or day. More than 3,000 raids have so far been carried out and several hundred people placed under house arrest.

But police union sources warned that it was impossible to rule out the possibility of further attacks. The ISIL terrorist group that claimed responsibility for the November 13 attacks has warned of further events targeting France, as well as other members of the international coalition carrying out bombing raids against ISIL targets in Syria and Iraq.

“The threat exists today, no matter how many measures we take to prevent it,” Céline Berthon, who represents a national police union, told BFMTV. “We also know that we will probably not prevent other acts from being attempted.”

On Thursday, Paris was commemorating the year’s second-bloodiest terrorist attack in France: the January 7 killing of 12 people at the offices of Charlie Hebdo, which was followed shortly by a hostage-taking at a Kosher supermarket. A total of 17 people were killed in that series of attacks, whose perpetrators claimed allegiance both to the Islamic State terrorist group and Al Qaeda in the Arabian Peninsula.

Earlier this week, President François Hollande attended a plaque-laying ceremony for the victims of the Charlie Hebdo shooting, also in northern Paris. A year ago, Hollande led a giant peace march attended by other heads of state through the streets of Paris — a gathering which was not repeated after the November 13 attacks, when police outlawed most public gatherings.

Despite the attack, in which the paper’s editor and several of its best-known illustrators were killed, Charlie Hebdo has relocated and continued to publish. This week the satirical newspaper unveiled its anniversary issue, which featured a drawing of a “god” figure carrying an assault rifle and running, his robe spattered with blood.

The headline read: “A year later, the assassin is still on the run.”