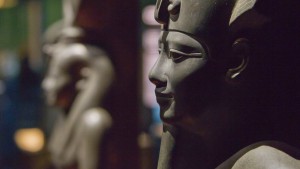 French President Francois Hollande and archaeological officials have used an exhibit in Paris of two preserved ancient Egyptian cities as a defiant example that the world will not be cowed by Islamic State militants who recently destroyed ancient Syrian heritage sites in Palmyra and killed a local archaeologist.
The exhibit at Paris’ Arab World Institute, “Osiris, Egypt’s Sunken Mysteries,” presents about 250 ancient objects that were recovered after a French archaeologist discovered the legendary cities Thonis/Heracleion and Canopus underwater over a decade ago.
Much like the mystery of ancient Atlantis, the cities had been lost somewhere between myth, history and legend — that is, until French archaeologist Franck Goddio made his landmark discovery in 2000 uncovering the sites in their watery grave near Alexandria. They had miraculously been preserved by sea sediment for nearly 2,000 years.
“This exhibit is an incredible achievement,” Goddio told The Associated Press. “For years, these cities seemed lost to the world — submerged because of natural calamities like earthquakes and big tides… And now here they are — being shown to the public for the first time. Some objects only came out of the water last year and others have never left Egypt before.”
The underwater excavation is ongoing with a team of 50, and Goddio estimates that only as little as 3 percent of the ancient cities have been uncovered so far.
Hollande, who inaugurated the exhibit this week, alongside the Egyptian minister of antiquities and minister of tourism, said that the message of this exhibit went far beyond Egypt — and said it showed how the will to preserve world heritage is stronger that the wish to annihilate it.
“This exhibit is a message, a fighting message that we have preserved these artifacts, a message of hope at a time when the Middle East is undergoing such drama,” he said.
In the last weeks, Islamic State militants destroyed the two-millennia-old temple of Bel, The Temple of Baalshamin, as well as three ancient tower tombs in the central city of Palmyra — what UNESCO has called an “intolerable crime against civilization.”
Hollande also paid his respects to the “sacrifice” of Khaled al-Asaad, the former director of the destroyed Palmyra heritage sites and one of the most important pioneers in Syrian archaeology in the 20th century, who was killed by Islamic State militants.
The exhibit was presented in collaboration with the Egyptian government, with officials keen to use this as a way to show that there’s another face to the Arab world as the one being projected by militants.
“What is going on in Syria, like the destruction of Palmyra and in Iraq, this kind of thinking is not the real beliefs of the area. This exhibit shows it. This preservation of culture here in Paris shows that it’s just a minority who somehow took the lead that are doing this damage,” said Mohamed Abdelmaguid, the general director of the Central Department of Underwater Antiquities in Egypt.
The many thousands expected to visit the Osiris exhibit in the coming months, as it travels to London’s British Museum, might not be drawn for their knowledge of current affairs, and be just be attracted by beauty of the artifacts.
The objects — like a beautiful and imposing 5-meter (16-feet) granite statue of the god Osiris, tools, and ritualistic objects — are in often near-perfect condition, and offer a rare public glimpse into the vast achievements of the ancient world.
The exhibit runs until Jan. 31.
egyptindependent.com