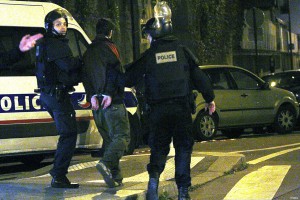 French police have arrested a man in the Paris region as part of the investigation into the 13 November attacks in the city, sources say.

Some 2,700 raids have been conducted since the attacks, with 360 people placed under house arrest across France, the AFP news agency reports.

Police have also arrested two people in northern France suspected of supplying weapons to one of the gunmen in the January attacks, reports say.

They were taken in for questioning.