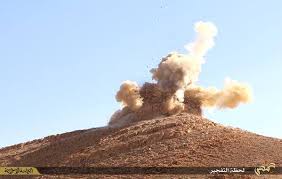 The Islamic State (Isis) has blown up shrines in the ancient city of Palmyra (Tadmur) in Syria after it planted explosives and mines around the Roman-era ruins.

A photo report published online and entitled Remove polytheism landmarks in Tadmur/Palmyra City shows IS militants carrying explosives to the hilltop Mazar of Mohammed Ali, which is then reduced into rubble.

It is unclear whether IS planted the bombs to destroy the ruins or whether it had done so to discourage attack by Syrian forces loyal to President Bashar al-Assad, which are advancing towards Palmyra.

Al-Watan Daily, which is close to the government, said the army has “intensified” operations against IS in Palmyra and the surrounding area.

The London-based Syrian Observatory for Human Rights, which relies on a network of local sources, said the regime ousted IS jihadists from al-Biyarat and is now 10km from Palmyra.

Since seizing Palmyra in May IS has reportedly executed hundreds of people in the city. In a recent development, Abdulkarim said the 1,900-year-old Lion of Al-Lat statue in front of the national museum has been destroyed by IS.

However, the jihadist group released a statement on 27 May claiming that it will preserve Palmyra’s historical monuments and the ruins but “pulverise statues that the miscreants used to pray for”.

IS also published photographs online which appeared to show the ancient Palmyra ruins unharmed. The 10 images were published as a photographic report entitled “The ancient city of Tadmur [Palmyra in Arabic]” and showed the amphitheatre, the city’s prison, columns and arches. The theatre appeared to have an IS flag flying on top of it.

The UN describes Palmyra as a site of “outstanding value”. An ancient metropolis and a caravan hub of several civilisations, Palmyra is full of precious sculptures and artefacts. It is renowned for its urbanism – a unique mix of Roman architecture with Greek-Persian and Babylonian influences. It is admired for its famous colonnaded main street and revered in particular for the temple of Baal, considered one of the most important cultural monuments of the entire region.