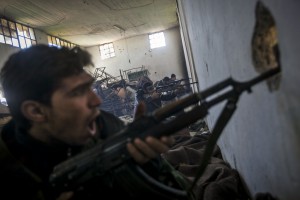 Palestinian fighters and Syrian rebels retook control Thursday of large parts of a refugee camp in Damascus that had been seized by Islamic State terrorists, a monitoring group said, according to AFP.

The Syrian Observatory for Human Rights said a number of armed groups in the Yarmouk camp in south Damascus “were able to regain control over all of the areas that ISIS had taken over.”

The terrorists overran the camp on Wednesday, raising fears for thousands of civilians inside and giving ISIS a potential beachhead inside Syria’s capital.

But armed Palestinian groups, backed by local rebels, launched a fightback later in the day.

“Syrian rebel groups entered the camp and helped the Palestinians push back ISIS in fierce clashes,” said Rami Abdel Rahman, the head of the Observatory.

Anwar Abdel Hadi, director of political affairs for the Palestine Liberation Organization in Damascus, said ISIS had been pushed “to the periphery” of the camp.

Six people were killed and 17 injured, he said, but he could not provide details on the toll.

The Britain-based Observatory said IS still controlled “some areas” in the camp and put the death toll at three.

The UN agency for Palestinian refugees, UNRWA, said it was “extremely concerned” about the safety of civilians in Yarmouk.

“UNRWA estimates that there are some 3,500 children among the 18,000 civilians living in Yarmouk. The intense armed clashes put these children at risk of serious injury and death,” UNRWA spokesman Chris Gunness said.

Yarmouk, located only about six kilometers (four miles) from downtown Damascus, was once a thriving home to 160,000 Palestinian refugees and Syrians.

But it has been devastated by fighting and a tight blockade imposed by the army nearly two years ago that created dire humanitarian conditions.