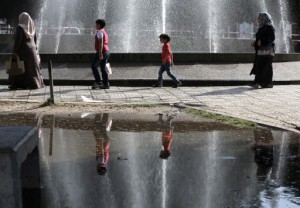 Gaza residents are unhappy with the territory’s Islamic militant Hamas rulers and by its war with Israel last summer, a new Palestinian poll released Tuesday shows.

The poll by the Palestinian Center for Policy and Survey Research shows that half of Gaza residents want to emigrate, compared to 25 percent in the West Bank.

The center’s director, Khalil Shikaki, said the 50-percent immigration figure in Gaza is higher than ever before and that among young people it is even higher, about 80 percent.

A majority, 63 percent, expressed dissatisfaction with “achievements compared to human and material losses” in the 2014 Gaza war that killed over 2,200 Palestinians and 73 people in Israel. Fighting devastated parts of Gaza and reconstruction has been slow, causing many there to ask if it was worth it.

Of those polled, 63 percent said they support launching rockets at Israel while a blockade is in place. The same number said they favor indirect talks between Hamas and Israel to negotiate a long-term truce in exchange for lifting the blockade.

Israel and Egypt imposed the blockade on Gaza after Hamas seized the coastal territory from forces loyal to Western-backed Palestinian President Mahmoud Abbas in 2007, arguing it prevents Hamas from getting more weapons.

Hamas has ruled Gaza with an iron fist since, leaving Abbas governing parts of the West Bank.

Despite the numbers, the poll found that if free elections were held today with just Abbas and Hamas leader Ismail Haniyeh competing, Hamas would win in Gaza and Abbas in the West Bank, both by slim margins.

The Palestinian Center for Policy and Survey Research polled 1,200 people in early June for the report, with a 3-percent margin of error.