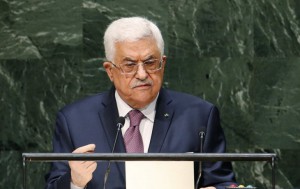 Palestinian President Mahmoud Abbas is considering opening a “new chapter in Palestinian history” in his U.N. General Assembly speech later this month, with the Palestinian leadership “in favor” of voiding the Oslo peace accords with Israel, a Palestine Liberation Organization (PLO) official, speaking on condition of anonymity, said on Monday.

The Oslo Accords, the first signed in 1993 and the second in 1995, outlined a peace process between Israel and the Palestinians with the aim of fulfilling the “right of the Palestinian people to self-determination.”

The accords created the Palestinian Authority (PA), which today controls the West Bank and coordinates with Israel on security matters. It also created Areas A, B and C of the West Bank, with A under the PA’s control, C under Israeli control and B under shared control.

PLO executive committee member Ahmad Majdalani told Palestinian news agency Maan News on Sunday that Abbas will tell the U.N. that the Palestinians will no longer abide by the Oslo Accords because of the failure of Israel to move towards the creation of a Palestinian state, as outlined in the 1993 agreement.

However, a PLO official, speaking to condition of anonymity to Newsweek because he was not authorised to speak to the media, said that the decision has not yet been made by the Palestinian leadership to move head with the symbolic act. The official confirmed that discussions over the move are continuing and that it has support from the majority of the Palestinian leadership.

“What Majdalani said, it’s something that is being studied and is very popular. Most of the leadership are in favour of that,” the official said.

“I think that the president, when it comes to an issue like this, does not comment until the decision has been made,” the official added. “But what I can tell you is what Majdalani said is indeed being discussed and I think that people would be surprised if I told you the names pushing for it.”

The official also said that the annulment of agreements on security cooperation between the PA and Israel was also under discussion.

In addition to the voiding of the Oslo Accords, Abbas is expected to announce that Palestine is a state under occupation, according to The Times of Israel, which also reported that Saeb Erekat, secretary-general of the PLO’s executive committee, was behind the move against Israel and had decided on this several months ago. Announcing that “Palestine” is a “state under occupation” would be a controversial move because there are a number of countries that do not recognise it as a state and its borders are still not defined.

The issue of whether Abbas would make the symbolic statement at the U.N. General Assembly was originally going to be decided at the meeting of the Palestinian National Council on September 14-15 but this has now been postponed until later in the year, the official confirmed. However, discussions over whether Abbas should make the statement will continue and a decision will be made before September 30.

Grant Rumley, researcher of Palestinian and Jordanian politics at the Washington D.C.-based think tank Foundation for Defense of Democracies (FDD), said that such a move at the U.N. would antagonize Israel and effectively send a message to the international community that it has to deal with the Palestinians.

“It’s ironic that the Palestinians are going to announce at the U.N. that they are annulling the Oslo Accords when this whole U.N. campaign basically killed the Oslo Accords. This has been the Israeli counter-argument to it,” he says.

“The Oslo Accords do not mandate any type of foreign relations with the PA but Abbas, since 2009, has blurred the lines between the two and used the PA as what he runs his foreign policy through,” he adds.

Abbas has routinely made symbolic statements in his annual U.N. General Assembly speech. Last year, he said that Israel had committed a “genocide” during the seven-week Gaza War. In 2011, he announced in his speech that the Palestinians would seek membership for a state of Palestine at the U.N. Security Council.

With Abbas, 80, aging and ten years into a four-year term following his victory in 2005 elections, analysts of Palestinian politics have predicted a looming political crisis in the West Bank, increasing speculation over who would succeed the Palestinian leader.