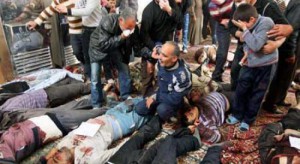 A Palestinian official says an agreement has been reached with the Syrian government to use military force to expel ISIS militants from an embattled Palestinian refugee camp in Damascus, wrote DailyStar.

Palestinian Labor Minister Ahmad Majdalani told the Voice of Palestine Radio that “we have agreed with the Syrian government on ways to force the terrorist group ISIS out of the Yarmouk refugee camp.”

He says “the military solution is the only one to force these terrorists out” of Yarmouk, which ISIS militants largely overran last week.

Majdalani is leading a West Bank delegation to Damascus to address the Yarmouk crisis.

Majdalani also says the Syrian government has agreed to ensure safe passage to refugees in Yarmouk and to provide them with shelter outside the camp.