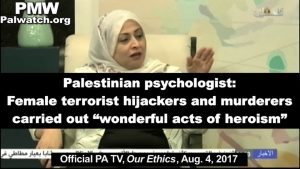 Women hijacking planes and murdering Israeli civilians are “wonderful acts of heroism,” according to a Palestinian Authority psychologist interviewed on the official PA TV program Our Ethics.

Citing the female “heroes” she felt were examples for other Arab women, psychologist Jultan Hijazi mentioned Laila Khaled, who participated in 2 plane hijackings; Dalal Mughrabi who led a bus hijacking and the murder of 37; Fatima Barnawi who placed a bomb in a cinema; and the “mother of Martyr Muhammad Farahat,” who led her son to his terror attack that murdered five young students.

After citing these and other examples of women involved in terror and murder, Hijazi indicated their importance for youth because “women carry out a large role in the children’s psychological preparation.”

It seems that according to Hijazi, having murderers as role models is important for Arab children.

In an interview with PA TV’s Our Ethics earlier this month, Hijazi said, “After 1967, the role of women evolved from an institutional stage to a stage of struggle and self-sacrifice.”

“We saw many examples of this, such as Laila Khaled (who participated in 2 plane hijackings – ed.), Dalal Mughrabi (led the murder of 37 – ed.), and Fatima Barnawi (who placed bomb in a cinema – ed.) who was the first female terrorist prisoner.”

“These women, through their operations, recorded wonderful acts of heroism that the generations still see as an example.

“The women also had a role in the Al-Aqsa Intifada in 2015 (the terror wave, 2015-2016 – ed.), and we saw how women attacked the Israeli soldiers at checkpoints in stabbing operations.

“I want to mention the mother of martyr Muhammad Farahat (who murdered 5 – ed.), a martyr from Gaza. In 2002, I think, she led him to the gate of the Israeli settlement where he carried out a military operation and killed several soldiers (sic., he murdered 5 students – ed.).

“As a mother, I am incapable of doing what she did, but she constitutes an example for the struggle, and she succeeded in strengthening the national values… Women carry out a large role in the children’s psychological preparation.”

Laila Khaled is a PFLP terrorist who participated in the hijacking of TWA flight 840 from Rome to Athens on Aug. 29, 1969 and the hijacking of El Al flight 219 from Amsterdam to New York on Sept. 6, 1970. The second hijacking was averted by the pilot and security personnel on board. They shot Khaled’s accomplice, Patrick Argüello, who had murdered one of the flight attendants. Khaled was overpowered and the plane landed in London, where Khaled was handed over and held by British police until she was exchanged on Oct. 1, 1970 for hostages held by the PFLP.

Dalal Mughrabi led the most lethal terror attack in Israel’s history, known as the Coastal Road massacre, in 1978, when she and other Fatah terrorists hijacked a bus on Israel’s Coastal Highway, murdering 37 civilians, 12 of them children, and wounding over 70.

Fatima Barnawi was a Palestinian Authority female terrorist who placed a bomb in a movie theater in Jerusalem in 1967 in an attempt to blow it up. The bomb failed to explode. She was sentenced to life imprisonment but was released in 1977 after serving 10 years. In 2015, PA Chairman Mahmoud Abbas honored Barnawi with the Military Star of Honor.

Muhammad Farahat is a 19-year-old Arab terrorist who murdered 5 yeshiva students and wounded 23 at the Atzmona Yeshiva, in Gush Katif in the Gaza Strip, on March 7, 2002. Farahat was killed by Israeli soldiers during the attack.

During the 2015-2016 terror wave, attacks against Israelis, including stabbings, shootings, throwing Molotov cocktails, and car rammings. It started in September 2015 and as of July 2016, 40 people were murdered (36 Israelis, 1 Arab, 2 Americans, and 1 foreign worker from Eritrea) and over 500 wounded.