The Palestinian Authority has arrested 47 Islamic State sympathizers in the West Bank this week, a senior Gaza-based jihadi affiliated with IS ideology told Breitbart Jerusalem 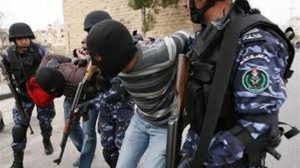 Most of the arrests, which were carried out by the PA’s intelligence corps, took place in the village of Yata near Hebron, as well as Hebron itself, and villages around Ramallah and Nablus.

Following this month’s deadly car-ramming attack in Jerusalem, the PA stepped up measures against radical Islamists in the West Bank, the source said. He estimated that there are hundreds of IS sympathizers in areas ruled by the PA. “Only in the southern West Bank we know of more than 100,” he said.

Last year, a shooting attack in a busy market in Tel Aviv that left four people dead was carried out by gunmen who according to Israeli security officials were inspired by IS. In a conversation with Breitbart Jerusalem, Abu Baker Almaqdesi, a senior jihadi who returned to his native Gaza after having fought for IS in Syria and Iraq, accused both the PA and Hamas of “standing up to IS to satisfy the Jewish entity as well as the non-believing countries, predominantly America.”

Almaqdesi claimed that support for IS in the West Bank is soaring, but declined to disclose numbers. He said, however, that further restrictions by the PA and Hamas would only enhance support for IS among young Palestinians.

The office of Adnan Aldumeiri, spokesperson for the Palestinian security forces, told Breitbart Jerusalem in a statement: “We do not comment specifically on figures. We simply act against anyone who would endanger the Palestinian national interest.”

A top officer in the PA told Breitbart Jerusalem that the Palestinian leadership has been more focused on Salafists, but he cannot confirm or deny the numbers of arrests.