You are here: Home / West Asia / Pakistan’s ‘war on terror’ failing in fight against extremism: activists 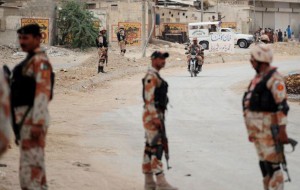 Worshippers at the infamous Red Mosque in the Pakistani capital Islamabad still gather in their hundreds for Friday prayers, but the fiery sermons calling for Sharia law led by hardline cleric Maulana Abdul Aziz are now a thing of the past.

The preacher, who once led a week-long armed conflict against Pakistan’s army and has repeatedly called for the overthrow of the government, has now been muzzled by authorities — though technically he remains a free man and a revered figure among the Taliban.

It is this duality — where hardened resolve against groups such as the Taliban is blunted by a willingness to tolerate and even fan the flames of extremism still bubbling beneath society’s surface — that activists say sums up the country’s more than decade-long battle against a homegrown Islamist insurgency.

Official and public opinion was galvanised against the Pakistani Taliban in the wake of a massacre at a school in the northwestern city of Peshawar in December 2014 that left more than 150 dead — mainly children.

It was at the dun-coloured mosque at the centre of Pakistan’s leafy capital that Muhammad Jibran Nasir, a 28-year-old lawyer, organised a demonstration in the wake of Aziz’s refusal to condemn the attack.

That protest, which called for the cleric’s arrest for inciting hate speech, snowballed into a nationwide movement among marginalised urban liberals who rallied to “Reclaim Pakistan” from the clutches of Islamist violence.

One year on and an army-led crackdown has put the country on course to see the fewest casualties linked to extremist attacks since 2007 — the year Aziz led his brief insurrection in the capital, which later became the catalyst for the formation of the umbrella Pakistani Taliban movement.

“The country was devoid of any road map for fighting these extremist forces, but now I think they have found their way,” said security analyst Imtiaz Gul.

According to Nasir, however, a military operation against extremists and government crackdown in the wake of the massacre have simply diverted attention from what lies beneath.

“The main thing is extremism — textbook reforms, madrassa reforms, mass awareness community reform cutting down the influence of the clergy in the society,” he told AFP.

“What we’re doing now is stifling the growth of the cancer but we’re not addressing the reason why we keep on getting cancer.”

For authorities, the doublethink is strategic, with activists such as prominent feminist Marvi Sirmed accusing Islamabad of a kind of realpolitik over who it chooses to crack down on — such as clerics who preach against the army.

Meanwhile Kabul blames Pakistan’s historical support for the Afghan Taliban prolonging much of the conflict wracking their country, and tensions drag on with India over disputed Kashmir and Islamabad’s support for proxy groups there.

But for the Pakistani public, a Supreme Court-led shift towards a seemingly more moderate stance on issues such as blasphemy merely masks simmering intolerance that can still boil over into mob violence.

Activists have noted some improvement, particularly after the Supreme Court observed in October that calling for reform to controversial blasphemy legislation is not equivalent to committing blasphemy.

But violence against those accused of blasphemy continues unabated, with hardliners inciting attacks that often target minorities. In November, hundreds of people torched a factory after one of its workers from the minority Ahmadi sect was accused of burning pages of the Koran.

In April social activist Sabeen Mahmud was gunned down outside the cafe she operated in Karachi, which hosted discussions on topics from feminism to the role of minorities in society.

That killing was blamed by authorities on college-educated Saad Aziz, also said to be the mastermind of an attack on an Ismaili Shiite bus that left 44 dead, highlighting the fresh threat posed by self-radicalised “lone wolf” extremists who are motivated more by global jihadism than local causes.

The “Reclaim Pakistan” movement flared again after Mahmud’s death, though it has largely shifted from the streets to the blogosphere.

Opposition Senator Sherry Rehman, who led the legislative charge for blasphemy reform under the last government and has lived under constant death threats since, says Pakistan has the will but needs to refine the way.

“We’ve come up to speed on the resolve, finally,” she told AFP.

“But we have to really think of this over the next 10 years — how we can dovetail this with the fight against extremism?

“This cannot just be a fight against terrorism.”